What to Know About Leaking Cast Iron Pipes 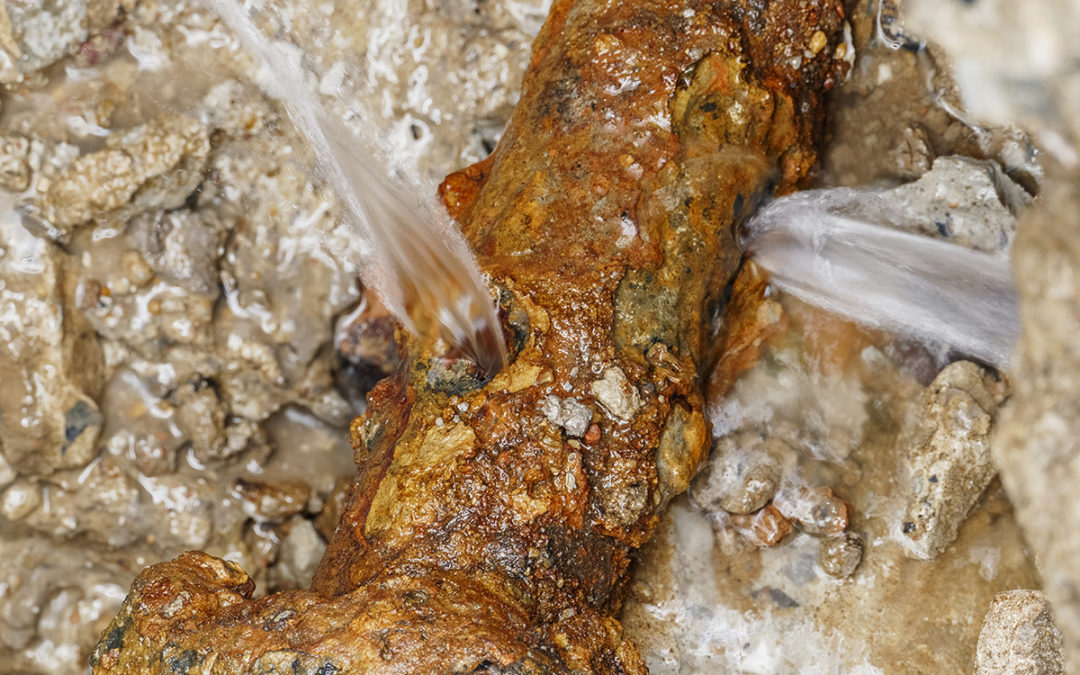 When it comes to many products, cast iron signals quality and durability. Many people own cast iron skillets and other cookware, which are well-known for their versatility in the kitchen. But there’s a big difference between using cast iron to cook your food and using it to deliver your home’s water supply.

As you probably know if you cook on cast iron, it tends to attract grease and other food debris, and it can be difficult to clean when it’s not properly seasoned. The same properties apply to cast iron pipes. Although cast iron seems like an ideal material to make pipes due to its strength, the damage is done from within, and over time, it can result in serious leaks and burst pipes.

What Risk Factors Are Associated with Cast Iron Pipes?

Like many metals, cast iron rusts. Initially, rust is only a minor cosmetic issue with most metals. But over time, it can begin to structurally impact metals as it accumulates. In cast iron pipes, the accumulation of rust is called tuberculation. As the amount of rust builds up, it impairs the free flow of water, which can also increase the risk of corrosion.

Got Cast Iron Pipes? We Can Inspect Them!

When you pick up a cast iron skillet, you can immediately feel its quality and durability. But that doesn’t mean you should trust that your cast iron pipes are good to go for the next several decades, let alone the next several years. In fact, if your home is at or approaching 20 years old and has cast iron pipes, or if you’re experiencing slow or backed up drains, they may already be severely compromised and serious water damage could be right around the corner.

At Aqueduct Plumbing Company, we help homeowners who have suffered pipe-related disasters, but we would rather help you stop the problem in its tracks before you’re walking around ankle deep in water. Our plumbing experts can come to your home and inspect your pipes for signs of blockage and damage, and we can also pinpoint the source of leaks and potential weak spots that could be trouble down the road.

How To Tell When It's Time To Repipe Your Home

Our PEX Pipes Are Superior to Cast Iron Pipes

We use high-quality PEX (cross-linked polyethylene) pipes which utilize new technology and designed to last for decades. Cast iron pipes fell out of favor in the late 1970s to be replaced by PVC pipes. PEX pipes are the newest generation of pipes and they have many benefits compared to older pipes, including:

Inexpensive—PEX pipes cost a fraction of the amount of money that copper pipes typically run. In addition, they can be installed faster. That means we’re on the job for less time, and we pass those savings onto you.

Sturdier than PVC—Unlike PVC pipes, PEX pipes don’t have to be glued together at their joints, making it less likely to burst when frozen. In addition, PEX pipes can safely expand and contract, making them ideal for homes that experience weather extremes.

Repiping Gives You Peace of Mind

Many homebuilders look to cut costs, and pipes are frequently an area where it’s decided that money can be saved. After all, problems with pipes often take years to show up. But kicking the can down the road doesn’t do anyone good, and it only keeps homeowners like you worried about the day that they’ll need to fork over thousands for a major water cleanup job and pipe repair.

It doesn’t have to be that way. Our plumbing team believes in preventative repiping work to avoid damaging leaks and burst pipes. When you contact us about your home’s cast iron pipes, there’s no obligation, and your estimate is free. It’s our goal to help you understand exactly what condition your pipes are in and the rest course of action to repair or replace them.

Ready to bring your home’s pipes into the year 2020? Contact Aqueduct Plumbing Company today for your free, best price in town quote on repiping!

This website uses cookies to improve your experience while you navigate through the website. Out of these cookies, the cookies that are categorized as necessary are stored on your browser as they are essential for the working of basic functionalities of the website. We also use third-party cookies that help us analyze and understand how you use this website. These cookies will be stored in your browser only with your consent. You also have the option to opt-out of these cookies. But opting out of some of these cookies may have an effect on your browsing experience.
Necessary Always Enabled
Necessary cookies are absolutely essential for the website to function properly. This category only includes cookies that ensures basic functionalities and security features of the website. These cookies do not store any personal information.
Non-necessary
Any cookies that may not be particularly necessary for the website to function and is used specifically to collect user personal data via analytics, ads, other embedded contents are termed as non-necessary cookies. It is mandatory to procure user consent prior to running these cookies on your website.
SAVE & ACCEPT